Beranda Edu Simple Rules Indonesian Grammar You Might Require
Komentar
JAKARTA, GESAHKITA COM–This article about the most important grammar rules in Bahasa Indonesia (Indonesian) is a complement to my guide: How I learned Bahasa Indonesia in 1 Month.

By learning these rules, you should improve your conversational skills significantly without putting in too much effort.

I’m not a native Indonesian speaker so if you think I wrote something wrong, please don’t hesitate to leave a comment. 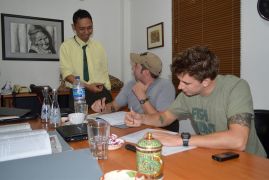 Placing words in the right order in Indonesian
Most of the time, you can place words in the same order as you would in English: Subject + Verbs + Object.

There are a few exceptions though:

They are placed after the noun. For instance: “Your cat” = “Kucing kamu” (literally “Cat you”)

They are also placed after the noun. For instance: “New car” = “Mobil baru” (literally “Car new”).

Akan
This is the most common way to talk about something that will happen in the future. It is a bit formal though and you can omit the word in some conversations as long as there is a time marker (see below).

Mau
This verb (meaning “to want”) is often used to replace “akan” in informal conversations.

About time markers:
Time markers are adverbs or sentences that indicate the time or date of an event: Two of the most common are:
→ “Besok”, meaning “Tomorrow” but also, confusedly, “Later after today” or “Next”.
→ “Nanti” meaning “Later”.

Talking about a past event in Indonesian

There is no past tense in Indonesian. Instead, time markers are used to indicate that the action occurred in the past: 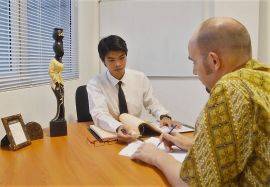 → “Dulu”, meaning “Before”. For instance, “Dulu, aku suka main futbol” = “Before, I used to like playing football” (literally, “Before, I like to play football”).

Talking about events happening now in Indonesian
Two words are used to talk about current events (present continuous in English):

→ Lagi is the most used in informal conversations. Placed before the verb, it generally describes a short action (eating, watching a movie, going shopping, etc). For instance, “I’m eating” = “Aku lagi makan”

→ Sedang is more formal and it can be used for both short and long actions (learning a language, studying, working in a company). It is also placed before the verb. For instance, “Saya sedang cari kerja” = “I’m searching for a job”.

Giving a date and the time in Indonesian 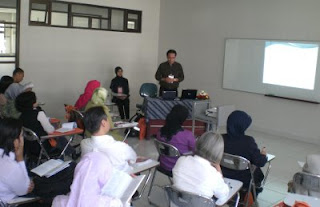 How to express the time or a date is different in English and in Indonesian. In the latter, before the time marker, you must add a noun to specify what the marker is about. For instance:

Using prefixes and suffixes in Indonesian
Many words in Indonesian are formed from a root word – verb, noun, adjective – to which a suffix or a prefix is added (sometimes both).

Those suffixes and prefixes modify the meaning to the root word according to specific rules. If you learn these, you will be able to improve your vocabulary significantly.

Based on my experience, this is the hardest part of learning Indonesian grammar. As a beginner though, you only need to understand the concept and to be able to recognize when there is a prefix or a suffix.

These are the most common prefixes:

Ber-: Usually, it is added to a noun, a verb or an adjective to form a verb whose meaning is “Having the attributes of…”.
Example: Berkacamata = To wear glasses (from “kacamata” = “glasses”).

Men-: Most often, it is added to a noun, a verb or an adjective to form a verb whose subject is actively doing something.
Ex: Mengajar = To teach (from “ajar” = “teaching”).

Nge-: A very informal way to create verbs from nouns or adjectives. It is popular among young people to adapt English words to Indonesian.
Ex: Ngebeer = to drink beer, Ngechat = to chat, Ngecharge = to charge a phone, Ngegym = to go to the gym, etc.

Pen-: Generally, it is added to a noun, an adjective or a verb to form the noun of a person doing/or being as the root word.
Ex: Pemalu = A shy person (from “malu” = “shy”).

Ter-: The easiest one, it is a superlative that can be translated by “the most”:
– “Terkenal” = “The most famous” (literally, “the most known”)

Di-: Adding “Di” before a verb is how to form the passive voice in Indonesian.
– Dipegang = to be grabbed (from pegang = to grab)

These are the most common suffixes:

-kan: It is often added at the end of a verb, an adjective or a noun to form a transitive verb. In particular, it is used when something is done for the benefit of another. It is also used to give orders.
Ex: Matikan lampu! = Turn off the light (from “mati” = “dead”)

You may have read that to form a plural in Indonesian, you can just say any word twice. For instance, to say “kids”, you can say “anak-anak” (from “anak” = “a kid”).

This is not completely true.

Doubling a word does not always work. It is adequate to translate an expression like “a bunch of”, but it is better to avoid in any other cases. In most informal speeches, the best thing to do is to leave the word as it is. Your interlocutor should understand if there is a plural from context alone. To help with that, you can use numbers or adverbs like “banyak” (a lot) or “beberapa” (several).

The easiest way to ask yes-no (or closed) questions in Indonesian is to add a question mark at the end of a sentence. For instance: “Is he cooking?” = “Dia lagi masak?” (literally “He is cooking?”).

You can also start your sentence with the formal “Apakah”, or its shortened version “apa”. For instance, “Is he your older brother?” = “Apa (kah) dia kakak kamu?”. “Apakah” means “Is…” or “Are…”.

Note that the interrogative pronoun “apa” and the shortened version of apakah, “apa”, are two different words with different meanings.

For instance:
Kamu bukan ayah aku = You are not my dad
Aku tidak mau keluar = I don’t want to go out

When speaking informally to friends, you will often replace “Tidak” with “Ngak”, “Gak” or “Tak”.

For instance:
Aku gak mau keluar = I don’t want to go out

When giving a negative order, you should use “Jangan” at the beginning of the sentence.

When talking about your experiences, your wishes or your tastes, it is better to avoid using a strict negation. The words “Belum” (“Not yet”) and “Kurang” (Less) can replace “Tidak” or “Bukan” to form more polite sentences.

To be or not to be?
“To be” is the most common English verb, yet its Indonesian translation, “adalah”, is rarely used. It might be confusing for beginners, but the rules are actually quite simple.

Generally speaking, “to be” is not needed (unless you want to sound formal). This is particularly true when it is used to describe something/someone or to give characteristics.

You can use “adalah” to make a statement that two things are equivalent.

Another use of “Adalah” is to say that something or someone is part of a group/structure.

For instance:
“Dia adalah pengawai pemerintah” = “He is a government employee”.

Indicating presence
To say “There is” or “There are”, you should use the popular word “Ada” (also: “Tidak ada” = “There is not”). It is placed at the beginning of sentence such as:
“Tidak ada rokok lagi di toko” = “There are no more cigarettes at the store”
“Ada siapa di rumah kamu?” = “Who is at your house?” (literally, “There is who at your house?”)

In informal conversations, “Ada” can also mean “to be present”. For instance: “Dia ada di rumah” = “He is at home”.

So keeps practising then you will know wheter Indonesian catch your words or understand what you say or not. Even when you request to speak up repeatedly no issues that is how learning by doing is shown to you.  Cheers!

English conversation can take you on a fun